Plectrophenax nivalis
Passeriformes
Members of this diverse group make up more than half of the bird species worldwide. Most are small. However their brains are relatively large and their learning abilities are greater than those of most other birds. Passerine birds are divided into two suborders, the suboscines and the oscines. Oscines are capable of more complex song, and are considered the true songbirds. In Washington, the tyrant flycatchers are the only suboscines; the remaining 27 families are oscines.
Emberizidae
The Emberizidae family is made up of the New World sparrows, longspurs, and some of the buntings. Most forage and nest on the ground. Most emberizids are seedeaters and have short, thick bills adapted for this diet, although they all eat insects and other arthropods at times, and feed them to their young. They are typically monogamous. Females generally build the nests and incubate the eggs and young, but both parents feed the young. Clutches are small, generally three to five eggs. Many of these birds are small, brown, and streaked, and stay close to cover, making identification challenging.
Fairly common winter east, rare west.

Breeding habitat is barren tundra with rock piles, boulder fields, and other rocky outcroppings that are used as nesting sites. In winter, Snow Buntings inhabit a variety of open lands, including short-grass prairie, farmland, beaches, and roadsides.

Across their range, flocks can reach the thousands and are often in the hundreds, although in Washington, flocks are usually much smaller. These flocks move around a lot from place to place, so their winter distribution can be spotty and ever changing. As they move through a field, birds at the back of the flock fly over the rest of the group to move to the front, making it appear that the flock is rolling. Ground-foragers, Snow Buntings are found in flocks outside of the breeding season.

Seeds are part of the Snow Bunting's diet year round, but especially in winter. During summer, they eat more insects and spiders, and the young are fed almost entirely an invertebrate diet. Birds in coastal areas may also eat tiny crustaceans.

Males arrive on the breeding grounds up to six weeks before the females. Territories with rock piles appropriate for nesting are hard to come by, so competition for territories is strong. They also sometimes nest on buildings. Nests are usually in protected crevices and rock cavities, although in populated areas, artificial nests may be used. The female builds a thick-walled nest of grass, lichen, moss, and roots, lined with fine grass, rootlets, plant down, feathers, and hair. She incubates 3 to 9 eggs for 10 to 16 days. Rock crevices in this harsh environment can be cold places, and the male feeds the female while she is on the nest so she doesn't often need to leave the nest during incubation. Both parents help feed the young, which leave the nest at 10 to 17 days. The parents continue to feed the young for 8 to 12 days after they leave the nest, although the young start catching some of their own food within 3 to 5 days. Snow Buntings typically only raise one brood a year.

Snow Buntings migrate in small, loose flocks. Males arrive on their Arctic breeding grounds in early April. Females follow in May, and both leave in the fall, arriving in and passing through Washington in mid-October. They winter throughout the open country of the northern United States and temperate Canada.

Throughout their range, Snow Buntings are common and widespread, although the number of birds present in one area in any given year varies greatly. Pesticides and Arctic habitat destruction are potential threats, but at the moment their nesting and wintering habitats are extensive and numbers appear stable.

A winter visitor to Washington, the Snow Bunting is seen from Mid-October through March. They are found in open areas of central and eastern Washington, and can often be seen along US Route 2. Along the coast they can be seen in open dunes and grassy areas. They can occasionally be seen in the Puget Trough, rarely in Seattle, and more often in the northern Sound by Bellingham. 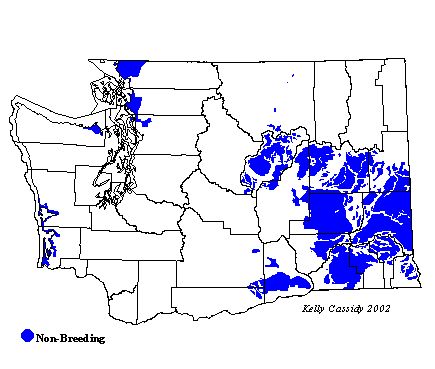