Sterna forsteri
Charadriiformes
This is a large and highly varied group of birds that do not have many outward similarities. Most are water birds that feed on invertebrates or small aquatic creatures. The order is well represented in Washington, with seven families:
Laridae
The family Laridae is made up of birds closely associated with water. Distributed throughout the world, representatives of this family nest on every continent, including Antarctica. Most are long-lived birds, many of which do not breed until they are three or four years old. Most are colony nesters and nest on the ground. Clutch size is generally small, varying from one to four eggs. Both parents incubate the eggs and help feed the young. The young typically hatch covered with down and stay in the nest for a few days, after which they leave the nest but stay nearby. Most, especially in Washington, raise a single brood a year. This group is known for its elaborate displays in the air and on the ground.

The Washington representatives of this family can be split into two groups, or subfamilies. The adaptable gulls are the most familiar. Sociable in all seasons, they are mainly coastal, but a number of species also nest inland. Many—but not all—are found around people. Gulls have highly variable foraging techniques and diets. Terns forage in flight, swooping to catch fish or insects. They dive headfirst into the water for fish. Although they are likely to be near water, they spend less time swimming than gulls.
Fairly common summer east. Casual west.
Source of Bird Audio

The Forster's Tern is similar looking to the Common Tern, but found in slightly different habitat. In breeding plumage, it has a light gray mantle with silvery-white primaries. Its long, light tail is deeply forked, and its undersides are all white. The wings appear very light, silvery gray in flight. It has a black cap, commonly found in terns. The bill is orange-red with a black tip, and the legs are orange-red'both more orange than those of the Common Tern. The adult in non-breeding plumage lacks the black cap. Black markings over the eyes, extending back to the ears, give the bird a distinctly masked look. The bill is black, and the wingtips are grayer than in breeding plumage. Juvenile birds have a significant amount of brown wash on their feathers, but this usually disappears by August.

Forster's Terns typically inhabit fresh and saltwater marshes in the summer. During migration and in winter, they can be found in a wider variety of aquatic habitat, especially around estuaries, inlets, and bays, but rarely out of sight of land.

The Forster's Tern flies and hovers over the water, plunging to take fish from just below the surface. It also forages for flying insects. This tern is aggressive towards other birds near its nest.

Fish make up the majority of the diet in all seasons, but in summer, insects are another major food source. Other aquatic creatures are also taken.

Often nesting atop muskrat houses or on gravel islands, Forster's Terns form loose colonies and sometimes associate with Yellow-headed Blackbird colonies. When Forster's Terns and Black Terns nest in the same marsh, the Forster's Terns choose higher and drier ground for their nests. Both sexes help build the nest, a platform of reeds and grasses, with a hollowed-out center lined with finer materials and shells. Incubation of the 3 eggs is shared by both sexes for 23-25 days. The development of the young is not well known, but both parents help feed the young at the nest.

Forster's Terns are migratory, but to a lesser extent than Common Terns. They winter along the southern US coastline.

Destruction of wetlands has led to declines in some areas. Recreational boating on nesting lakes, which can flood nests, may also have a negative impact on populations of Forster's Terns.

The Forster's Tern is found mostly east of the Cascades, although it has been recorded on the west side, often after August. It is common on freshwater habitat from May to mid-August in the Columbia Basin. It breeds from the Potholes region, south along the Columbia River to the Tri-cities area. It is also found farther up the Columbia, although less commonly, to Grant and Adams Counties, and west to Klickitat County. 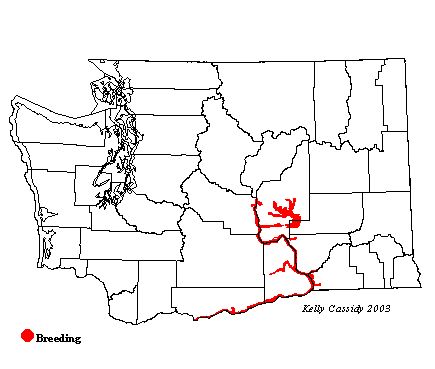